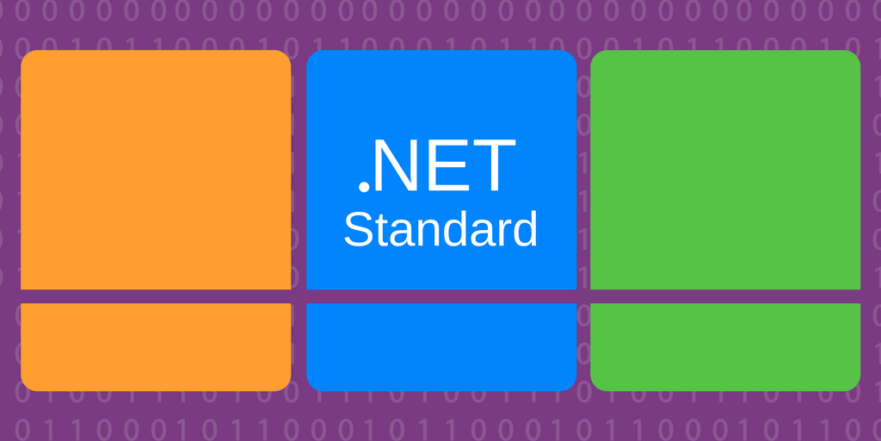 You can learn how the .NET ecosystem works on Stackify. It consists of runtimes (.NET Framework, .NET Core and Mono for Xamarin), class libraries, and a common infrastructure (runtime tools and languages).

In this article, we are going to talk about the thing that makes the runtimes play well together and enables them to share code. Here, you’ll learn what .NET Standard is and what it isn’t.

.NET Core also has a class library. This one is a subset of the .NET Framework library and contains less APIs.

Having different class libraries with different sets of APIs is not very useful. This makes it difficult to share code between runtimes as the code you write for one runtime might not work in another runtime, because it doesn’t have the APIs that you need.

To solve the difficulties with having multiple class libraries, there is .NET Standard. This is a set of specifications that tell you which APIs you can use. This specification is implemented by all the runtimes.

.NET Standard is the evolution of PCLs and will eventually replace PCLs completely. Here are the main differences between .NET Standard and PCLs:

Alright, let’s talk a bit about how .NET Standard is versioned. 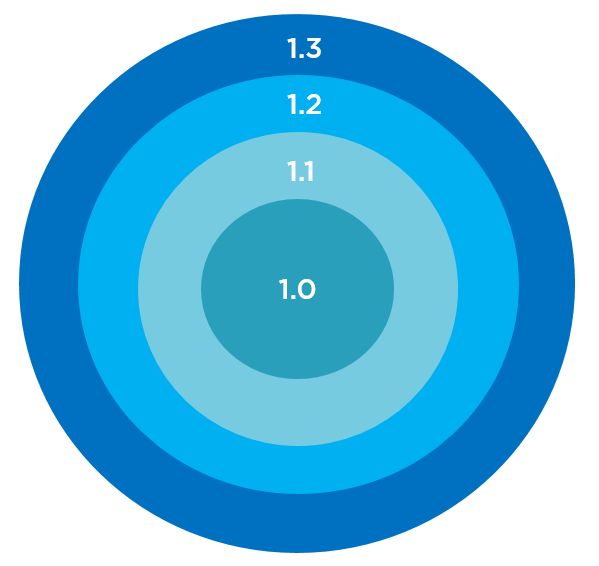 So each version contains all of the APIs of the previous versions. There are no breaking changes between versions and when a version is generally available, its contents will never change, so you can rely on the API specification of that version.

So therefore, if you create a .NET Standard library that you want to share, you should always target the lowest version of .NET Standard that you can get away with. This way, you can reach the maximum amount of platforms.

Target the lowest version that you can

There are several tools that can help you to get started with .NET Standard.

You can use the .NET API Browser to find out what APIs are in which version of .NET Standard. This is a great page on the Microsoft docs website. Just select the .NET Standard version that you want to browse and either browse or search for specific functionality. This is a really good tool.

You can also analyze your current projects for compatibility with a specific .NET Standard version to see if you can convert them to .NET Standard. To do this, you can use the .NET Portability Analyzer, which is a tool from the Visual Studio Marketplace. You can use it from Visual Studio or from the command line.

Finally, I wanted to address Shared projects. You see these things in Visual Studio and they look like another form of code sharing, next to PCLs and .NET Standard.

So what are they? Shared Projects are a project template in Visual Studio that do not result in assemblies when you build them. They are just links between files and projects, just like linked files did in previous versions of Visual Studio. They do not provide any APIs like PCLs and .NET Standard do. They just act as a file-sharing mechanism between projects. 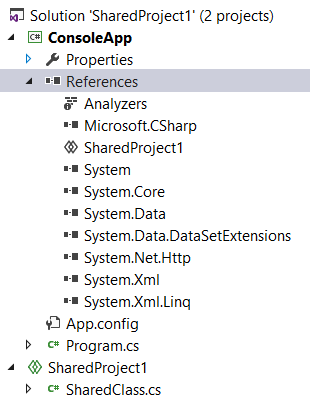 Look at the example in the image above. The ConsoleApp project references the ShareProject1 project, which contains the SharedClass class.

When you build this, from the compilers’ viewpoint, the ConsoleApp contains the SharedClass class and the SharedProject doesn’t exist.

Shared Projects are nothing more than a Tool in Visual Studio that helps you to share files. They aren’t bad things, they are just different than .NET Standard and they are Visual Studio specific.

So, we’ve learned that .NET Standard is not a physical thing, but a specification of APIs.

It is the next version of Portable Class Libraries and it can be used by all the runtimes in the .NET ecosystem (.NET Framework, .NET Core, and Mono for Xamarin). Each runtime implements .NET Standard.

It has an additive versioning system, meaning that each new version contains all the APIs of the previous versions, which makes it backwards compatible. And there never are any breaking changes between versions.