Dependency injection is a programming technique that makes a class independent of its dependencies. It achieves that by decoupling the usage of an object from its creation. This helps you to follow SOLID’s dependency inversion and single responsibility principles.

As I explained in my previous articles about the SOLID design principles, their goal is to improve the reusability of your code. They also aim to reduce the frequency with which you need to change a class. Dependency injection supports these goals by decoupling the creation of the usage of an object. That enables you to replace dependencies without changing the class that uses them. It also reduces the risk that you have to change a class just because one of its dependencies changed.

The dependency injection technique is a popular alternative to the service locator pattern. A lot of modern application frameworks implement it. These frameworks provide the technical parts of the technique so that you can focus on the implementation of your business logic. Popular examples are:

You can introduce interfaces to break the dependencies between higher and lower level classes. If you do that, both classes depend on the interface and no longer on each other. I explained this approach in great details in my article about the dependency inversion principle.

The goal of the dependency injection technique is to remove this dependency by separating the usage from the creation of the object. This reduces the amount of required boilerplate code and improves flexibility.

But before we take a look at an example, I want to tell you more about the dependency injection technique.

The 4 roles in dependency injection

If you want to use this technique, you need classes that fulfill four basic roles. These are:

You can skip the interface role and inject the service object directly into the client. But by doing that, you break with the dependency inversion principle and your client has an explicit dependency on the service class. In some situations, this might be ok. But most often, it’s better to introduce an interface to remove the dependency between the client and the service implementation.

The injector is the only role that isn’t required by the dependency inversion principle. But that’s not an issue because you don’t need to implement it. All frameworks that I listed at the beginning of this article provide ready-to-use implementations of it. 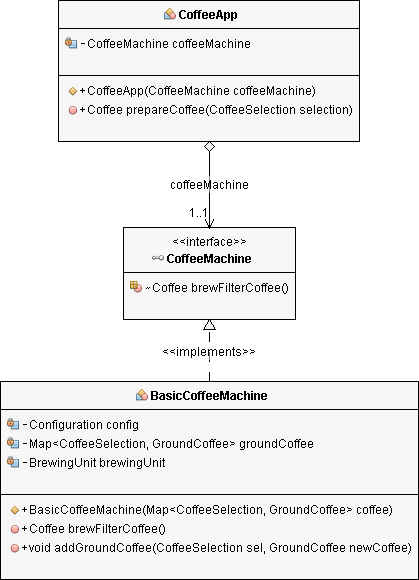 The only thing that’s missing is the injector. I will introduce an implementation of that role by using the Weld framework. It’s the reference implementation of Jakarta EE’s CDI specification. Since version 2.0, you can bootstrap it in a Java SE environment without adding a huge framework stack.

CDI 2.0 is part of all Jakarta EE 8 application servers. If you deploy your application into such a server, you don’t need to bootstrap the CDI container.

And if you’re using a different application framework, e.g., Spring, you should use the dependency injection implementation provided by that framework. It enables you to use the same concepts that I show you in the following example.

Before you can use CDI’s dependency injection feature, you need to bootstrap a CDI container. But don’t worry, Weld makes that very simple. It provides a build-in main method which bootstraps a container for you. You can run it by executing the following command.

But bootstrapping the CDI container without an application doesn’t make much sense. You can add your application in two steps which require almost no code.

You need to add a dependency to weld-se to your application.

Writing and running the CoffeeAppStart class

The next step is the only implementation task required to run your application in a CDI container. You need to write a method that observes the ContainerInitialized event. I did that in the CoffeeAppStarter class. Similar to the examples in my articles about the dependency inversion principle and the service locator pattern, this class starts the CoffeeApp.

Observing events in CDI is simple and powerful. You just need to annotate a method parameter with @Observes. The container will call this method as soon as someone fires an event for the type of the annotated parameter. Weld fires the ContainerInitialized event after it started the CDI container. So, this method will be called during application startup.

You probably already recognized the @Inject annotation in the previous code snippet. It tells the CDI container to inject a CoffeeApp object when the constructor of the CoffeeAppStarter class gets called. So, you can use the CoffeeApp app attribute in the startCoffeeMachine method to brew a cup of filter coffee.

This approach obviously doesn’t follow the dependency inversion principle because the interface is missing. But I think this is one of the rare occasions in which it is acceptable to inject the service implementation directly. The only task of the CoffeeAppStarter class is to start the coffee machine by calling the prepareCoffee method on the injected CoffeeApp object. I don’t see any need to add another abstraction to make the CoffeeApp replaceable.

In the previous articles, the CoffeeAppStarter class had to instantiate a specific implementation of the CoffeeMachine interface. It provided that object as a constructor parameter while instantiating a CoffeeApp object.

The dependency injection technique enables you to improve this even further. It provides a way to separate the creation of an object from its usage. By doing that, you can replace a dependency without changing any code and it also reduces the boilerplate code in your business logic.