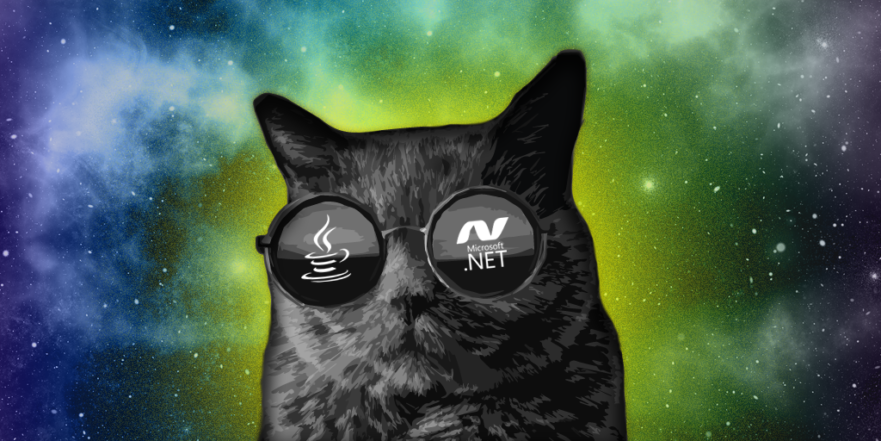 Comparing technologies is always fun. Not that we want to start yet another programming language war, but it is really quite interesting to take a fresh look at a familiar technology and put it into perspective. Plus, it’s quite common for developers and business owners to be faced with the choice between two or more options, be it a fresh career move or a tech stack choice for a new project.

In this article, we will focus on the Java vs .NET comparison. Why these two? Well, it’s quite common for Java developers to switch to .NET and vice versa. To spice things up, these two technologies are widely considered to be the major options for complex, large-scale application development in the enterprise domain.

Before we start, let’s set the record straight. It’s not really an “apples to oranges” comparison. Java vs .NET might not be the fairest of matchups: Java is a programming language, while .NET is a framework that can use several languages. Yet, one of the languages used with .NET, C#, is considered a direct Java competitor. This makes Java vs C# a popular (and often difficult) choice that business owners and developers regularly need to face.

So, if you are at the crossroads and trying to decide which technology is better for your career or product, this article is for you. Without going into too much detail (Wikipedia already has it covered after all), let’s see how Java and .NET are similar and what makes them differ.

What do Java and .NET have in common?

They are created for heavy lifting

Both Java and .NET framework are perfect enterprise-level technologies. They work fantastically well with high-load systems, complex architectures, and big data applications. Both Java and .NET are scalable and reliable solutions for large-scale projects.

They have something to offer for every occasion

Java is known to be an exceptionally multi-purpose language. Remember the slogan “write once, run anywhere”? At the same time, the .NET framework can also run on desktop and server (as well as mobile) applications.

Another piece of common ground between Java and .NET is their similar syntax. Java is largely influenced by C++. At the same time, C# shares certain syntax specifics with other C-style languages, including C, C++, and Java itself.

It is hard to find a developer who wouldn’t know about OOP. There is a good reason for that. Object-oriented programming is a common standard for software development, so using a language that supports this approach out of the box is a good call. Both Java and .NET allow for code reuse, are flexible, and offer better troubleshooting opportunities thanks to the modular structure of their code.

Both of them could use some help from time to time

As open-source materials, both Java and .NET support various third-party frameworks and reusable components. This makes development easier and more efficient: as a developer you don’t need to reinvent the wheel each time you come across a specific problem. You just look up a library or framework that can do the job you need, then simply plug it into your project.

What are the main differences between Java and .NET?

They play well with other languages (just different ones)

Java works smoothly with a number of other languages, including Clojure, Groovy, Scala, and Kotlin, while .NET developers can choose between C#, F#, and Visual Basic.

Each of them has a home of its own

Both technologies feel at home in different environments. For example, Visual Studio is the one and only IDE for building .NET applications, while Java developers have a wider selection: There are 4 main IDEs available: Eclipse, IntelliJ IDEA, Oracle NetBeans, and Oracle JDeveloper.

Java is known for its backward compatibility: migrating code between Java platforms is easy. While you can still do this with .NET, it is usually more time-consuming and difficult (although, .NET Standard and .NET Core can make this process easier).

And the winner is…

Neither. While the approaches used by Java and .NET are somewhat different, they have a common goal: Building scalable enterprise solutions and web/desktop apps.

As a result, there is no right or wrong way to go about the choice of programming language. It all depends on your needs/requirements, project specifics, and the availability of talent (for a business owner looking to hire developers).

Elena Ruchko is a digital marketer at Daxx, a company that connects companies with talented Java developers from Ukraine. She writes about software engineering, remote team management, startups and digital marketing.