What Is a Programming Language?

We can associate programming with both hardware and software. However, the rise in popularity of programming languages is due mainly to their applications in web or mobile platforms and data science. Experts predict that this meteoric rise will continue as our world further digitizes.

Top 7 at a Glance

It is never too late to get into a promising programming career. Seven of the most popular programming languages below have been handpicked for their growing number of their users and application support. 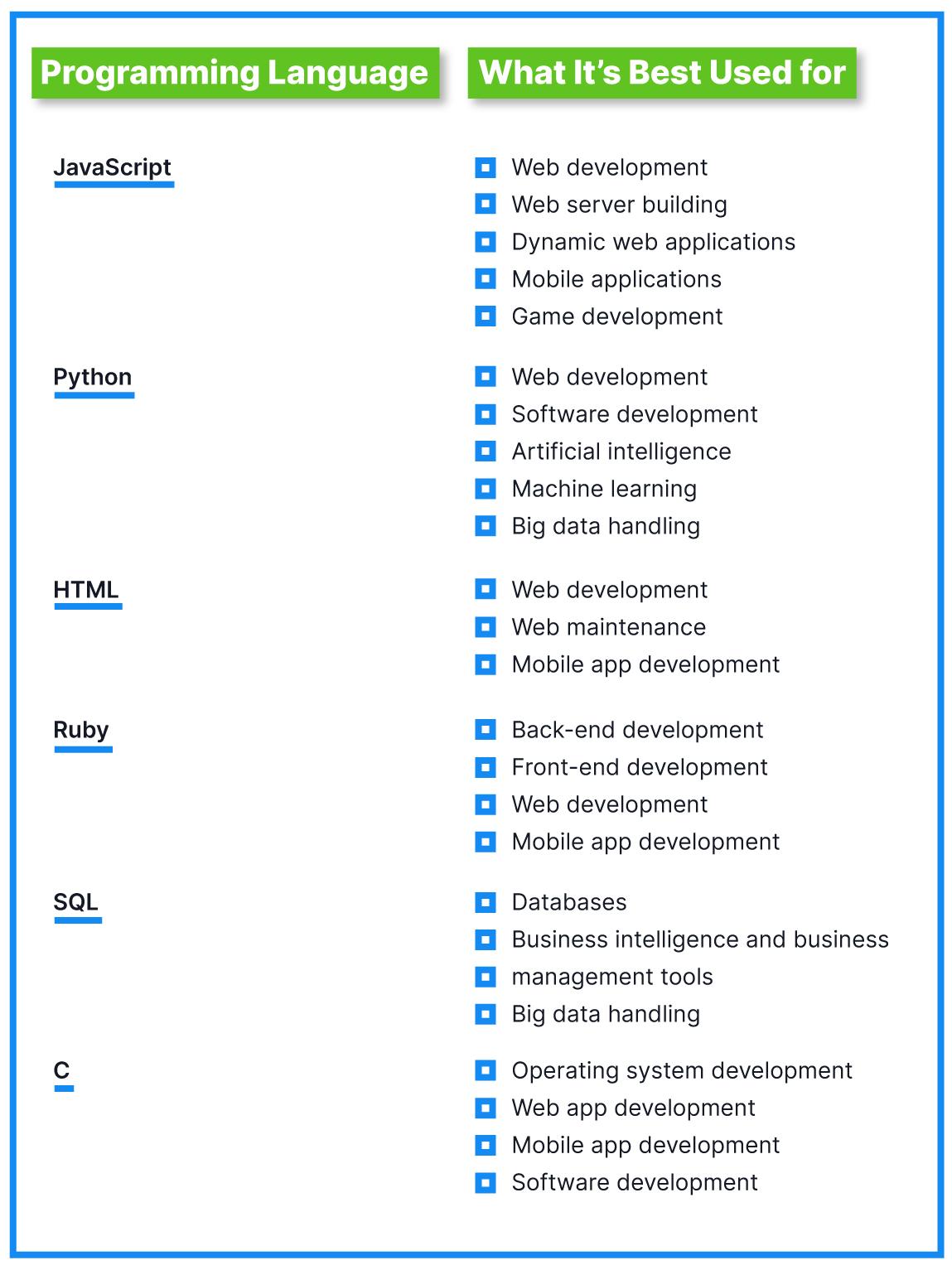 If you’re looking for a popular language to learn, JavaScript should probably come first. JavaScript remains one of the most-used programming languages, even  30 years after its first development. In fact, according to Web Technology Surveys, as many as 98% of all websites currently utilize a form of JavaScript-based client-side web application development.

Another statistical report found that JavaScript skills are highly sought by hiring managers in the U.S. and worldwide. Better still, the average yearly salary of a Javascript developer is around $100,000 in the U.S.

Aside from salary and job opportunities, JavaScript is considered fairly easy to learn. Its various applications give you a solid background in programming languages in general, even without prior coding knowledge. The language has widely accessible on-line communities and learning resources with some available for free!

The biggest weaknesses coders face with JavaScript is that its source code can be viewable to its users. This can put client-side security at risk. Another pain point is that JavaScript only supports single and not multiple inheritances. Older browsers can also find it challenging to support the language’s latest features or functions.

Python also sits atop of the list of most popular programming languages. In fact, according to the Popularity of Programming Language Index, Python occupies the top spot. The list is based on how many programming language tutorials are searched on Google. By comparison, JavaScript ranks third on the list.

Python also has a rich history, having been developed in 1991. Amidst hundreds of more modern languages, Python remains in high demand, elegantly combining simplicity with incredibly complex capabilities.

An open-source, higher-level language, Python has a syntax that closely mimics English. Thus, it is easy to understand even for beginners with no previous background in programming languages. But do not underestimate Python’s functions and capabilities. It can be used for leveraging artificial intelligence and machine learning, particularly in developing deep-learning applications.

Various Python GUI frameworks help mobile application developers make it work natively on iOS and Android.  Hence, even if it’s an interpreter-type language with many object-oriented and interactive qualities that digital devices don’t usually run, you’ll still be able to integrate it seamlessly.

In terms of salary, an entry-level Python programmer makes around $80,000 annually. Meanwhile, a yearly salary for a more experienced programmer can go up to $172,500.

As for its flaws, there are usually two main concerns. First, Python is notably slower compared to other programming languages. Second, it is known to consume a lot of memory. Hence, memory management can be a concern if you’re developing something that requires memory optimization.

There’s an ongoing debate on whether HyperText Markup Language, or HTML, is a programming language or not. The same applies to Cascading Style Sheets, or CSS. Many point out that its label as a “markup language” proves it’s not a programming language. On the other hand, sources like UC Berkeley recognize it as one.

For this line-up, we define HTML as a general-purpose programming language typically used to format how information is displayed on a website. Indeed, it differs from the more powerful programming languages that most budding software developers expect. It’s a bit feature-anemic. Still, it’s one of the most beloved and popular languages that even non-coders often use.

HTML is not a very demanding language to learn, but it can still give HTML developers annual average salaries ranging from $65,000 to $100,000.

Ruby was originally released to the public in 1995, but it didn’t turn into a much-loved programming language until 2006. Today, it is one of the most in-demand languages around the world. An open-source language, Ruby is constantly growing and developing and supported by a vibrant community of dedicated coders.

In terms of salary, Ruby programmers get decent pay. Their average yearly salary can range between $35,000 and $138,000. Meanwhile, the annual salaries of more experienced coders can go as high as $175,000. No wonder so many budding coders choose it as their primary programming language.

You should be aware of a few cons to using Ruby.

First, it’s not suitable for deep learning. It might not prove helpful for those looking for a machine language learning solution, either. Finally, its flexibility can make it difficult to debug.

SQL – Structured Query Language – is our next language on the list. It’s a powerful, higher-level language designed to access, use and manipulate databases. With SQL, you can address every aspect of database operations, from retrieving new data, creating and updating records, and even setting permissions. However, SQL will require a translator to make it functional for a low-level operating system.

Those planning to start a career in programming with SQL as their primary programming language can expect a salary between $30,000 and $120,000.

Be warned, though. It’s a complicated programming language to navigate through. Since it’s not an open-source language, some of its versions can be quite costly too.

PHP, which stands for Hypertext Preprocessor, is an open-source language much like other mainstream programming languages featured in this line-up. It has an extensive library of assets and resources courtesy of a supportive online community of developers.

PHP is typically used to develop web servers and embedded systems within HTML. Aside from that, this language can be used for deep learning and machine learning, web and mobile app development and other complex projects … as long as you use the right libraries!

Some programmers prefer PHP over JavaScript due to its added data encryption. PHP can execute applications on a server, generate HTML and deliver its functions to the client without the need to reveal its underlying code.

Unfortunately, despite its varied functions and applications, PHP is sometimes regarded as the lowest-paid fully-fledged programming language. That’s reflected in the low, average salary of experienced PHP programmers, which may not exceed $40,000.

Finally, we simply can’t end the list without featuring the king of hyped languages. Having been developed in 1972, C has the longest history and staying power among the mainstream programming languages in our list. This is because C is a powerful and excellent language you can use for almost anything. It can create operating systems, dynamic web applications, mobile platforms and various types of applications.

While it’s not necessarily a machine language, C can still be used to implement machine learning algorithms. With its support of business applications, it’s no surprise how in-demand C continues to be.

However, even C isn’t perfect. It still has a couple of disadvantages. First, it can be a complicated language to learn. However, a background in coding will help with the learning curve. Second, debugging in C can be a pain, since there’s no way to check for errors for each line of code. In addition, it lacks exception handling, which further complicates catching anomalies within your code.

Which Programming Language Will be in High Demand in the Future?

There are several reasons any budding programmer should consider learning JavaScript. However, don’t neglect to consider other factors. There is a considerable possibility we didn’t feature the programming language that best suits the apps you want to develop.

Erlang, for instance, is an excellent language for developing communication apps. Meanwhile, Flowgorithm is a free language for anyone who wants to code a flowchart maker. The fact is, you’ll never see every language featured on a “top list” because there are simply too many!

Staying On Top of Your Programming Game

It’s never too late nor too early to jumpstart your career as a programmer. By learning any programming languages listed above, you’ll prepare yourself to land one of those high-paying programmer positions you’re shooting for. Good luck!

Uday Tank is a serial entrepreneur and content marketing leader who serves the international community at Rankwisely. He enjoys writing and blogging about marketing, productivity, business, health, diversity, management and technology.