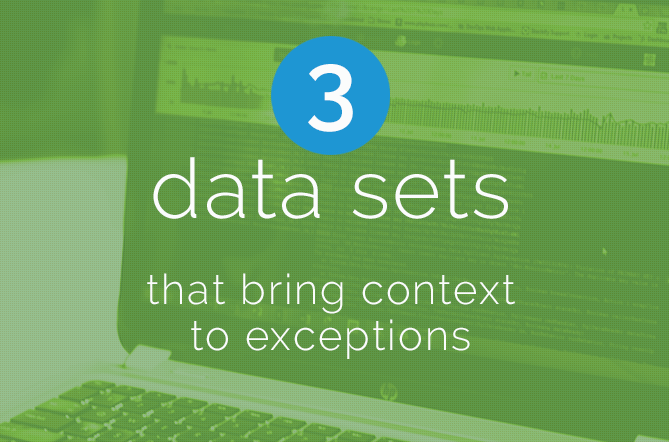 Even the smallest exception can cause material damage to your company’s operations, which, in turn can have repercussions on revenue. So it’s obviously important to have a grasp on your plan to track and troubleshoot exceptions.  It seems like a simple enough process – the exception is raised, you look at it, and then make changes to your app so it never happens again. But we both know it’s never that easy.

You can’t simply rely on a single exception because it lacks context. In the case of troubleshooting an exception, context is the clarity required to fully assess and understand the cause of an exception. And you’re rarely going to get it with just the exception alone.

In this second article in a three-part series on simplifying and evolving your application troubleshooting, let’s look at three basic data sets (and there are more, but we’ll start with just three) that can help provide context:

So, as you can see, while some exceptions are easy enough to address with little or no context, it’s far more likely you’re going to need additional data to go from just having information around what happened, to truly having some intelligence around why it happened.

In the final article of this 3-part series, I’ll next discuss how to go from gathering intelligence and context to truly having insight into your errors when troubleshooting.