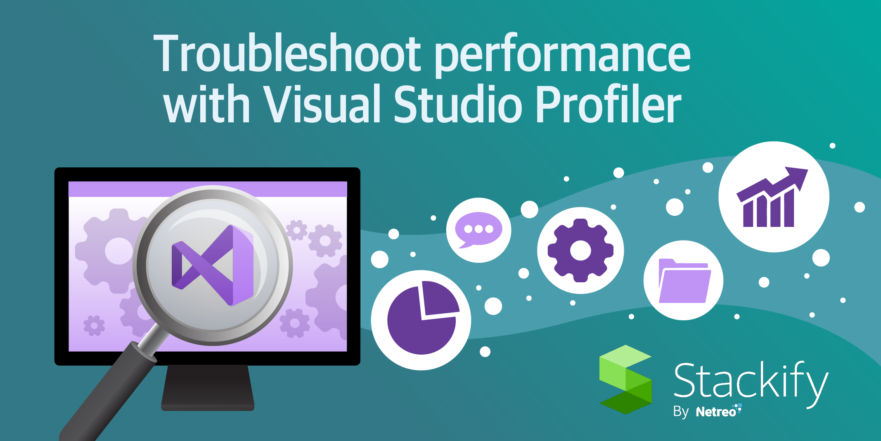 In this article, we will focus on the specific Visual Studio profiling tools for memory and CPU usage.

If you want to learn more about the different VS performance profiling tools, read about the Top Visual Studio Profiling Tools.

Two of the most commonly used tools within the suite are Memory Usage and CPU Usage tools, because a slow application typically results from memory and CPU issues. Though it does not apply at all times, these two are the most common culprits.

The CPU Usage tool is another staple for VS and measures two basic things. First is the percentage of CPU utilization over time or the percentage of your total CPU usage. The second is the number of times a call to action function appears on the call stack over time.

There are two main actions to take when troubleshooting using the CPU Usage tool: data collecting and analyzing.

The above image shows the CPU Usage data report. You can see two groups: Top Functions and Hot Path. Under Top Functions are application functions that are taking up a lot of the CPU. The Hot Path shows areas of the code that also use a lot of the CPU’s resources. Through these reports, developers can pinpoint which areas should be optimized.

When you click on one of the functions under the functions table, it displays a flat list of called functions but does not show the path of each function. To view the call tree of the report, navigate the Current View dropdown at the upper left corner of the page, select Call Tree.

The flat list instantly changes to the image above. When you click on a function, it shows you the path and views of what transpired during the system execution. You can see the cause of performance issues and whether they stem from the native code, external code or other scenario.

Besides Visual Studio tools, you can also find other reliable code profiling tools that can efficiently help you, including the developer’s most reliable sidekick, Prefix.

Prefix is one of the world’s most dynamic code analysis tools. Profiling with Prefix can help even the most experienced developers when it comes to optimizing slow SQL queries, hidden exceptions and a host of other code issues. What’s better is that it works for PHP, .NET Core, Python, Node.js, Java and Ruby.
You don’t have to face another coding nightmare because Prefix can quickly back you up. DOWNLOAD PREFIX FOR FREE TODAY!