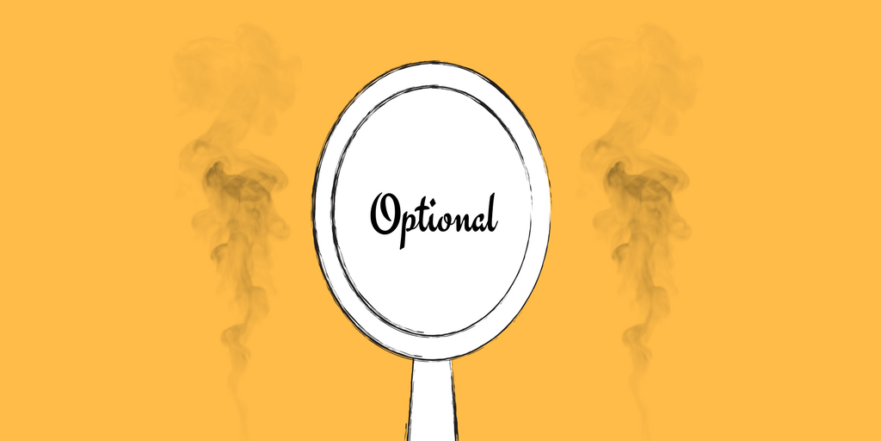 There are a lot of misconceptions in the software development world. Today we are going to address this one:

“Java 8, for example, introduced the Optional class. It’s a container that may hold a value of some type, or nothing. In other words, it’s a special case of a Monad, known in Haskell as the Maybe Monad.

You can now stop using null in Java.

You can now say goodbye to NullPointerExceptions.”

I won’t go into the Monad thing – at least explicitly, but I challenge the “goodbye to NullPointerException” part.

Java 8 did indeed introduce the concept of Optional. An instance of Optional can be created in the following way:

There are now several ways to use the newly-created Optional variable.

Developers coming from an imperative programming background will probably use it this way:

But Optional offers a better alternative. Thanks to lambdas and functional programming idioms creeping into the Java world since Java 8, it’s possible to rewrite the above snippet:

In short, it removes boilerplate code and lets the developer focus on the “business” code i.e. foo.doSomething().

The power of Optional

From an Optional, I want to call a method on bar if it exists.

By now, the functional approach has become bloated again, in any form.

From a readability point of view, it’s better to get back to imperative programming again – if only partially.

As can be seen, the crux of the matter is to:

Once we are able to get the latter, it’s quite straightforward to call ifPresent(). That’s where functional programming transformations can help.

The naive approach is to use map():

However, the result is now a nested structure that is even as hard to work with as previously.

Developers familiar with streams and this issue know about the flatMap() method, and how it can transform a List<List<T>> stream into a simple List<T> stream, thus “flattening” the data structure. Good news, Optional also has a flatMap() method that works in exactly the same way:

At this point, one can only be very enthusiastic about Optional and how it will make the code better. No more NullPointerException! Functional programming forever! And yet, this is not as simple as it looks.

The assumption that we built everything on is that an Optional instance can wrap either null or a value. Unfortunately, there’s a third alternative:

An Optional can be null.

Of course, that’s evil to the core, but that’s perfectly valid regarding the Java language:

Nothing prevents a variable from being assigned null, and Optional is a type like any other. Of course, your favorite IDE will probably complain, or even propose that you to fix the issue.

Yet, there’s no way you can trust third-party code to have been so diligent. Even regarding your own code, using Optional must be done in a consistent manner across all your codebase. That can be an issue if it, or your team, is large enough.

Does that mean we are back to square one?

There are some creative solutions available to handle null values beside Optional.

Before Java 8, one simple way to cope with null was to create a subtype representing Null for a specific type, name it accordingly, override its methods with an empty implementation and make it a singleton. For example, given the Foo class:

It can then be used in the following way:

While it’s quite interesting from a design point of view, it’s lacking compared to Optional:

Annotations to the rescue

The problem caused by null values comes from interacting with external code.

Another alternative to handle null values is through the usage of annotations, one for nullable values, one for non-null ones. For example, Java Specification Request 305 respectively offers @CheckForNull and javax.annotation.Nonnull. They can be used on parameters, methods and packages:

Because annotating each method and parameter is pretty annoying,

Unfortunately, JSR 305 is currently dormant while the latest update is from 2006. However, despite its dormant status, there are existing implementations of the JSR, like here and here.

Annotations alone are not enough to help with the better handling of possible null values. One needs some help from static code analyzers, either standalone such as FindBugs, or embedded in IDEs such as IntelliJ IDEA and Eclipse. Each tool provides its own custom annotations package to handle nullability:

The biggest flaw of nullability annotations is that they don’t provide anything on their own. They are just hints, and require a correctly configured static code analyzer to be of any help.

Some languages, such as Kotlin, take another approach by leveraging the type system itself to enforce non-nullability. For every “real” type, there’s one nullable and one not-nullable type.

Given a type Baz:

Moreover, the compiler knows the difference between nullable and non-nullable types. It will complain is one tries to call a method from a nullable type:

For the second line to compile, one needs to use the safe call operator:

Even if the getBar() method returns a non-nullable type, bar can be null because empty might be null. Hence, bar type is nullable – Bar?.

All seems to be perfect in Kotlin world, but there’s one minor caveat. Kotlin reuses a lot of Java libraries. Those libraries do not offer the enhanced type system described above. That means it’s very important to be very cautious regarding interaction with Java code.

In this post, we saw how Optional only partially solves the NullPointerException issue, because Optional type variables can still be null. There are other alternatives to handle null values, such as nullability annotations, or even switching to other languages where null handling is part of the type system. However, none of them offer true protection from NullPointerException.

Yet, that doesn’t mean that Optional is of no use. In particular, it really shines in functional programming pipelines introduced by Java 8.

Nicolas Fränkel is a Developer and Software Architect with 15 years of experience. He also double as a teacher in universities and higher education schools, a trainer and triples as a book author. He shares his thoughts weekly in his blog, A Java Geek