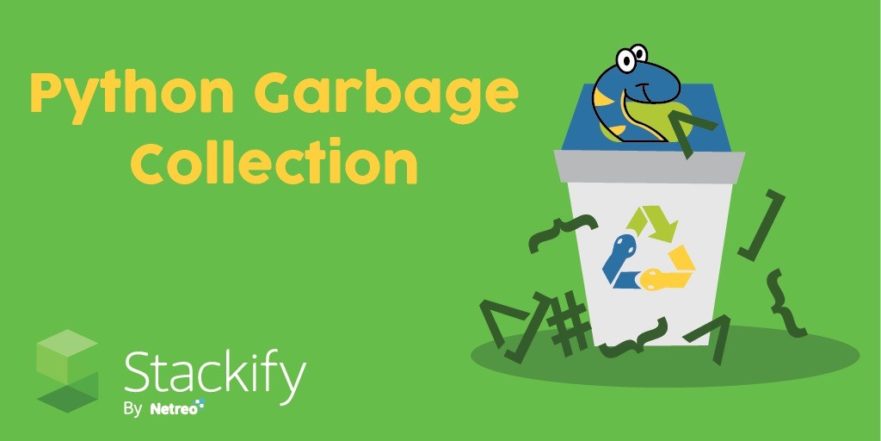 Python is one of the most popular programming languages and its usage continues to grow. It ranked third in the TIOBE language of the year in 2021 due to its growth rate. Python’s ease of use and large community have made it a popular fit for data analysis, web applications, and task automation.

What is Python garbage collection and why do we need It?

If Python is your first programming language, the whole idea of garbage collection might be foreign to you. Let’s start with the basics.

A programming language uses objects in its programs to perform operations. Objects include simple variables, like strings, integers, or booleans. They also include more complex data structures like lists, hashes, or classes.

The values of your program’s objects are stored in memory for quick access. In many programming languages, a variable in your program code is simply a pointer to the address of the object in memory. When a variable is used in a program, the process will read the value from memory and operate on it.

In early programming languages, most developers were responsible for all memory management in their programs. This meant before creating a list or an object, you first needed to allocate the memory for your variable. After you were done with your variable, you then needed to deallocate it to “free” that memory for other users.

This led to two problems:

These problems were undesirable, and so newer languages added automatic memory management.

With automatic memory management, programmers no longer needed to manage memory themselves. Rather, the runtime handled this for them.

However, automatic memory management comes at a cost. Your program will need to use additional memory and computation to track all of its references. What’s more, many programming languages with automatic memory management use a “stop-the-world” process for garbage collection where all execution stops while the garbage collector looks for and deletes objects to be collected.

In this section, we’ll cover how garbage collection works in Python.

This section assumes you’re using the CPython implementation of Python. CPython is the most widely used implementation. However, there are other implementations of Python, such as PyPy, Jython (Java-based), or IronPython (C#-based).

To see which Python you’re using, run the following command in your terminal (Linux):

There are two aspects to memory management and garbage collection in CPython:

Let’s explore each of these below.

The main garbage collection mechanism in CPython is through reference counts. Whenever you create an object in Python, the underlying C object has both a Python type (such as list, dict, or function) and a reference count.

Your program’s code can’t disable Python’s reference counting. This is in contrast to the generational garbage collector discussed below.

You can use the sys module from the Python standard library to check reference counts for a particular object. There are a few ways to increase the reference count for an object, such as

Let’s use a Python REPL and the sys module to see how reference counts are handled.

First, in your terminal, type python to enter into a Python REPL.

Second, import the sys module into your REPL. Then, create a variable and check its reference count:

Notice that there are two references to our variable a. One is from creating the variable. The second is when we pass the variable a to the sys.getrefcount() function.

If you add the variable to a data structure, such as a list or a dictionary, you’ll see the reference count increase:

As shown above, the reference count of a increases when added to a list or a dictionary.

In the next section, we’ll learn about the generational garbage collector, which is the second tool Python uses for memory management.

In addition to the reference counting strategy for memory management, Python also uses a method called a generational garbage collector.

The easiest way to understand why we need a generational garbage collector is by way of example.

In the previous section, we saw that adding an object to an array or object increased its reference count. But what happens if you add an object to itself?

In the example above, we defined a new class. We then created an instance of the class and assigned the instance to be a property on itself. Finally, we deleted the instance.

By deleting the instance, it’s no longer accessible in our Python program. However, Python didn’t destroy the instance from memory. The instance doesn’t have a reference count of zero because it has a reference to itself.

We call this type of problem a reference cycle, and you can’t solve it by reference counting. This is the point of the generational garbage collector, which is accessible by the gc module in the standard library.

There are two key concepts to understand with the generational garbage collector.

In your terminal, enter python to drop into a Python REPL.

Import the gc module into your session. You can then check the configured thresholds of your garbage collector with the get_threshold() method:

By default, Python has a threshold of 700 for the youngest generation and 10 for each of the two older generations.

You can check the number of objects in each of your generations with the get_count() method:

As you can see, Python creates a number of objects by default before you even start executing your program. You can trigger a manual garbage collection process by using the gc.collect() method:

Running a garbage collection process cleans up a huge amount of objects—there are 577 objects in the first generation and three more in the older generations.

You can alter the thresholds for triggering garbage collection by using the set_threshold() method in the gc module:

In the example above, we increase each of our thresholds from their defaults. Increasing the threshold will reduce the frequency at which the garbage collector runs. This will be less computationally expensive in your program at the expense of keeping dead objects around longer.

Now that you know how both reference counting and the garbage collector module work, let’s discuss how you should use this when writing Python applications.

We’ve spent a fair bit of time discussing memory management generally and its implementation in Python. Now it’s time to make it useful. How should you use this information as a developer of Python programs?

As a general rule, you probably shouldn’t think about Python’s garbage collection too much. One of the key benefits of Python is it enables developer productivity. Part of the reason for this is because it’s a high-level language that handles a number of low-level details for the developer.

Manual memory management is more relevant for constrained environments. If you do find yourself with performance limitations that you think may be related to Python’s garbage collection mechanisms, it will probably be more useful to increase the power of your execution environment rather than to manually alter the garbage collection process. In a world of Moore’s law, cloud computing, and cheap memory, more power is readily accessible.

This is even realistic given that Python generally doesn’t release memory back to the underlying operating system. Any manual garbage collection process you do to free memory may not give you the results you want. For more details in this area, refer to this post on memory management in Python.

The Instagram dev team noticed that the shared memory would drop sharply soon after a child process spawned. When digging further, they saw that the garbage collector was to blame.

The Instagram team disabled the garbage collector module by setting the thresholds for all generations to zero. This change led to their web applications running 10% more efficiently.

While this example is interesting, make sure you’re in a similar situation before following the same path. Instagram is a web-scale application serving many millions of users. To them, it’s worth it to use some non-standard behavior to squeeze every inch of performance from their web applications. For most developers, Python’s standard behavior around garbage collection is sufficient.

While Python handles most of the hard parts of memory management for you, it’s still helpful to know what’s happening under the hood. From reading this post, you now know that you should avoid reference cycles in Python, and you should know where to look if you need greater control over Python garbage collector.