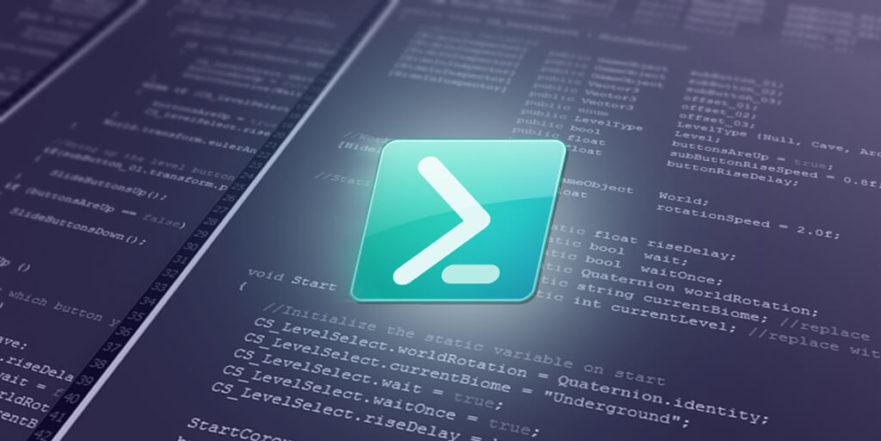 PowerShell is the shell framework developed by Microsoft for administration tasks such as configuration management and automation of repetitive jobs. The term ‘PowerShell’ refers to both – the shell used to execute commands and the scripting language that goes along with the framework.

The scripting aspect of it is similar to Perl programming. The shell is comparable to bash in UNIX, with Microsoft even incorporating commands such as man, ls, and ps for convenience.

PowerShell 1.0 was released in November 2006 for Windows XP SP2, Windows Server 2003 SP1 and Windows Vista. While, initially, PowerShell had to be manually installed, the latest version 5.0 is available default with Windows 10. So, you can just go to Cortana and type ‘PowerShell’ or navigate from the Start menu. Read this to learn more about which Windows version uses which PowerShell version.

PowerShell also comes with an Integrated Scripting Environment (ISE). The ISE screen is split into two parts – the top one is used to write the script and the bottom for running commands manually. The ISE gives you a GUI experience, with smart syntax suggestions, coloring, tab completion and error handling.

If you are a Windows administrator who has to perform user management, DNS configurations and other tedious tasks frequently, PowerShell is the tool for you.

Benefits of PowerShell over Command Prompt

Well, PowerShell certainly has more power! Command prompt is an interface available to execute simple DOS commands; most users have not explored it beyond ping, ipconfig or in the programming world, ftp. However, PowerShell is much more than that. While there are many differences between the two, here are a few important ones:

Cmdlets are lightweight commands used in the PowerShell environment. Most of the cmdlets in PowerShell use the Verb-Noun format.

To know more about cmdlets and understand what differentiates them from commands, you can read this link. One of the fundamental differences that we will discuss below is its object orientation – it reads input from a pipe and outputs objects (not text) to a pipe.

Let’s go through an example to understand how this works.

On the command line, when you run the Get-Service cmdlet, you get a list of services on your machine. 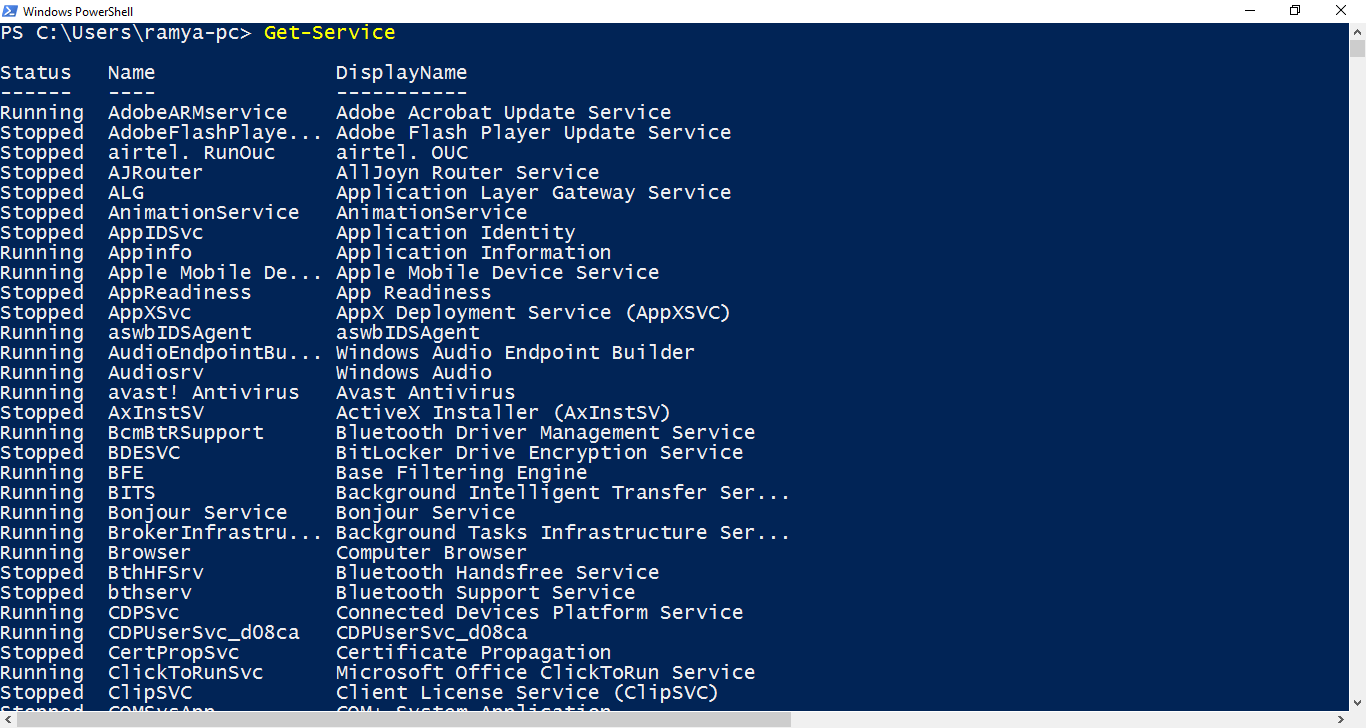 You can further filter these just to show the services that are running: 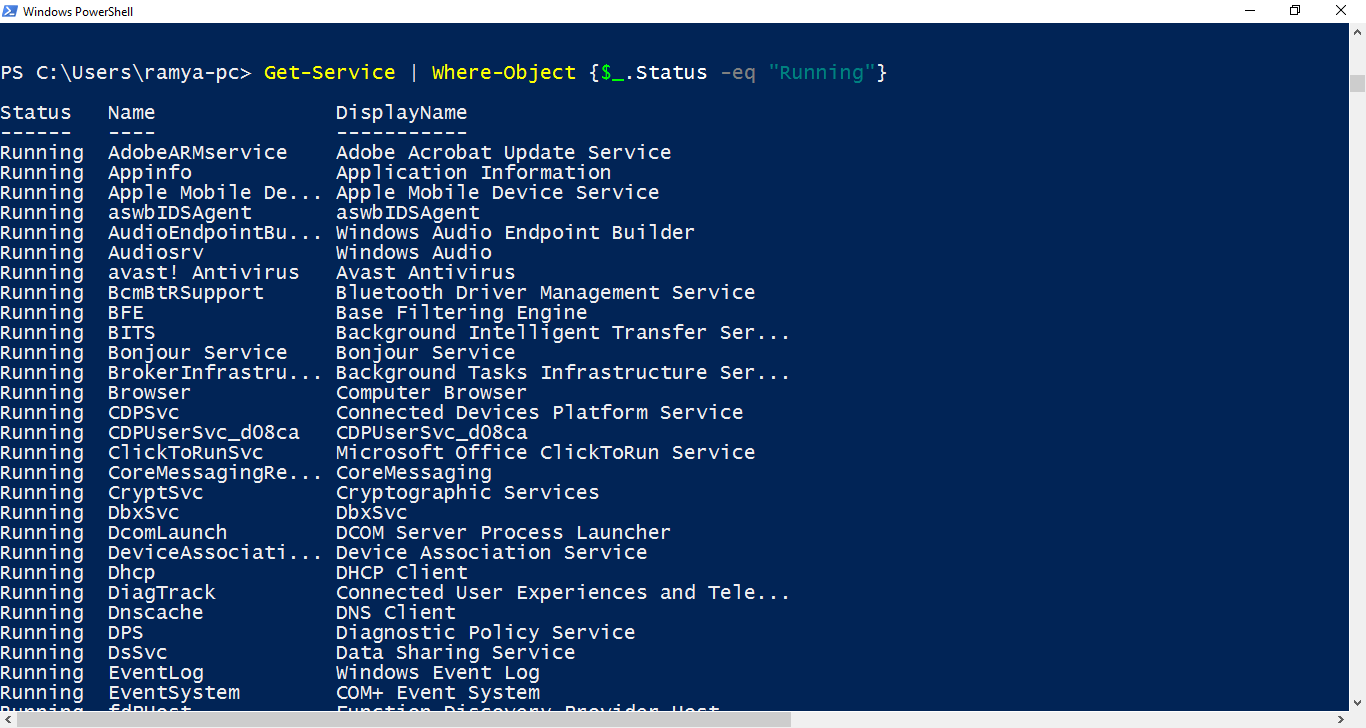 Here, PowerShell processes every record output that GetService throws evaluate whether the ‘Status’ attribute is ‘Running’, and filters accordingly.

Note: $_ refers to the current record/object in the pipe.

One thing this example shows is the cmdlet’s record-oriented feature. The processing of one record at a time gives the flexibility to interpret data in a more intelligent way than it would be possible with text streams.

You can filter the previous output further, to just display the ‘Name’ of the running services. 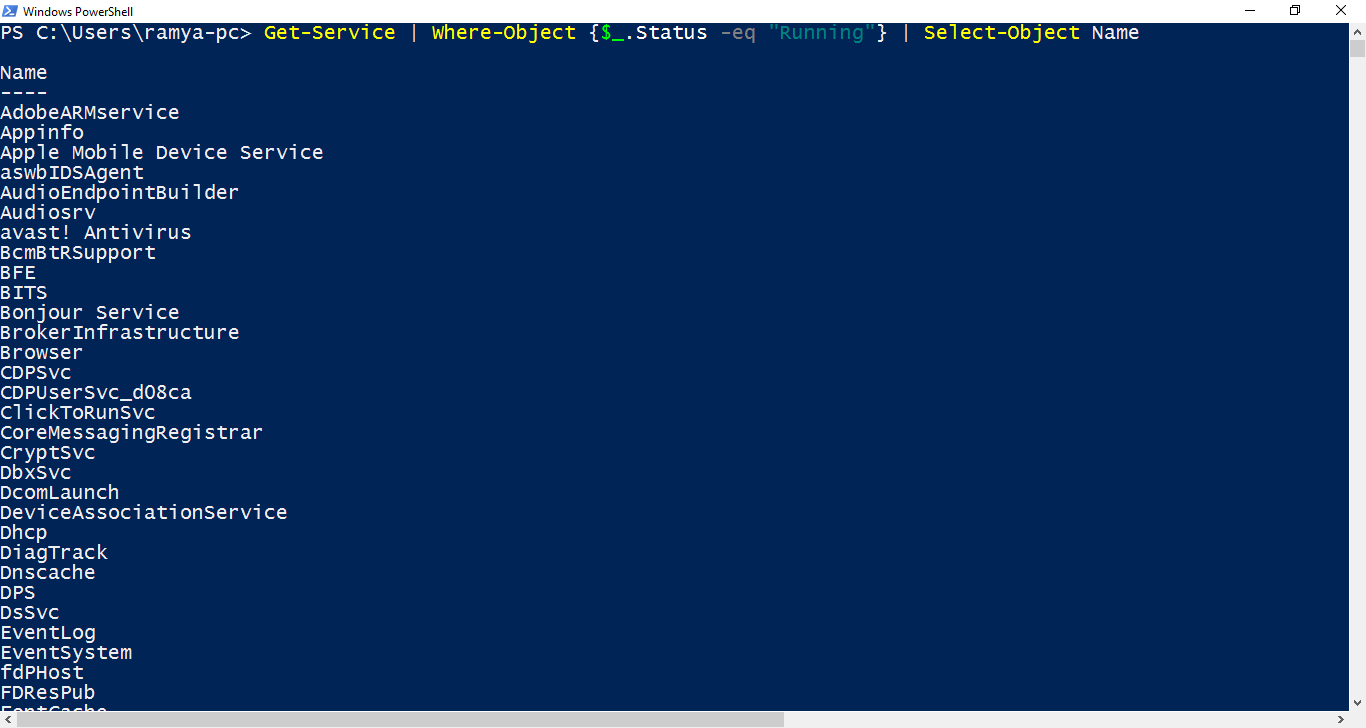 To learn more about any command, use

The latter opens up detailed help with examples on the msdn site.

Here, you can learn some basic commands to get you initiated into PowerShell. If you are a visual person, go for this video. For a detailed list, this would help.

Aliases are alternate names for your cmdlets. These are usually handy for frequently used commands and when you don’t want to type the whole Verb-Noun format. For example, Get-Command has an alias ‘gcm’, Get-Service has ‘gsv’, Where-Object has a simple ‘?’.

Many UNIX commands are set up as aliases by default. For example, cat->Get-Content, man->help, ps->Get-Process, etc.

Run Get-Alias to see the complete list of aliases available in PowerShell.

Of course, you can create your own aliases as well.

To create a PowerShell script, all you have to do it open a file, write your code and then save it. PowerShell scripts have a .ps1 extension. Your script can then be run manually or automated to run as a job every day to perform administration tasks. Get started here for creating simple scripts with looping and conditions.

Through PowerShell commands and scripts, there is so much benefit to be gained for an IT administrator. Here is a list of use cases where an administrator can leverage PowerShell commands. From gathering information about servers to managing folders, processes, services, memory, network, software installations, and registries, there are tons of features that PowerShell encapsulates. Not to forget about its seamless integration with .NET.

Once you get over the initial learning curve, you can start exploiting the functionalities of PowerShell. When you’re ready to explore further, check out the following tutorials and resources: