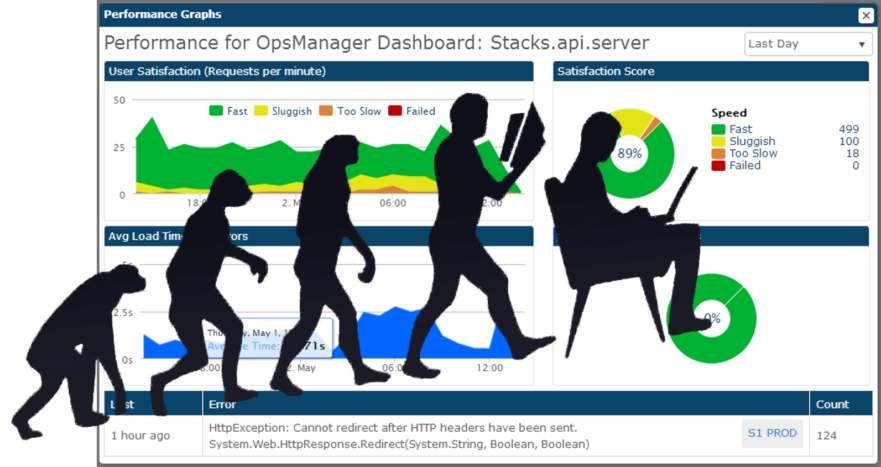 ‘Perfection would be a fatal flaw for evolution’

In technology, as in life, everything evolves, grows, develops, mutates and eventually goes away, being replaced with improved versions. In the past several years, application development evolved and applications have come to play a more centric part of many businesses, even those that traditionally were not software players. (Walmart’s sophisticated inventory management software is a good example of this.)

Several of the drivers that contributed to the evolution of application development have, at the same time, increased application complexity.

In the early stages of server/client application, application monitoring really focused on infrastructure monitoring. Servers uptime, server load, network equipment, and storage. Important logs and errors were simply dumped to text files. When an issue occurred, the operation or support engineer had to view the data in tools like excel or notepad and analyze it manually in order to understand the root cause of an issue.

Acquiring all of these tools can easily cost thousands of dollars of month even for small IT projects. Deploying, supporting, and maintaining these tools also requires a lot of time by already busy system administrators.

But even if we look past costs, the end result is ‘death by tools’ where, with so many tools, when something happens, it is very hard to use all the capabilities of the many tools at hand and engineers are retreating to the simple ‘notepad’ methods.

These second generation issues were the trigger for the third generation of application monitoring, that not only unify all the point products into an integrated platform, so there is no need for point products, but be application-aware enough to also correlate the information collected to provide context and intelligence around not just what happened and when, but where, how often and the elusive why.

It’s important to note that in earlier generations of monitoring, it’s the operations engineer, and not the application developer, that has access to the infrastructure, monitoring tools and the resulting monitoring data. Supporting today’s complex and ever changing web applications requires developers to be much more involved in application support. This drives the need for 3rd generation solutions to serve both operations and development teams.

Getting to Contextual Intelligence

As logs, errors, app performance, server performance, database performance, and custom app metrics are becoming integrated and ‘aware’ of each other, the users of these 3rd gen platforms can now get a more complete picture.

Application errors no longer need to be only a few lines with limited information, but rather can be seen as a collection of the error itself, log data, stack traces, web requests, process data, headers, relevant variables affected, and server performance metrics at the time of the error – all giving a more complete picture to developers and making issue diagnostics faster and more efficient.

For example, in the past, server load may or may not have been easily correlated to an issue with, say, web page performance. With an app aware platform, it is easier to see that these things are tied together and happen at the same time, making time-to-resolution shorter. You can read more about a company that used next gen monitoring to improve their application and customer satisfaction here

Until now, the evolution of application development has historically outpaced an organization’s ability to support and troubleshoot those very same applications. Stackify is proud to lead the application support evolution and continue innovating to help today’s operations and development teams.