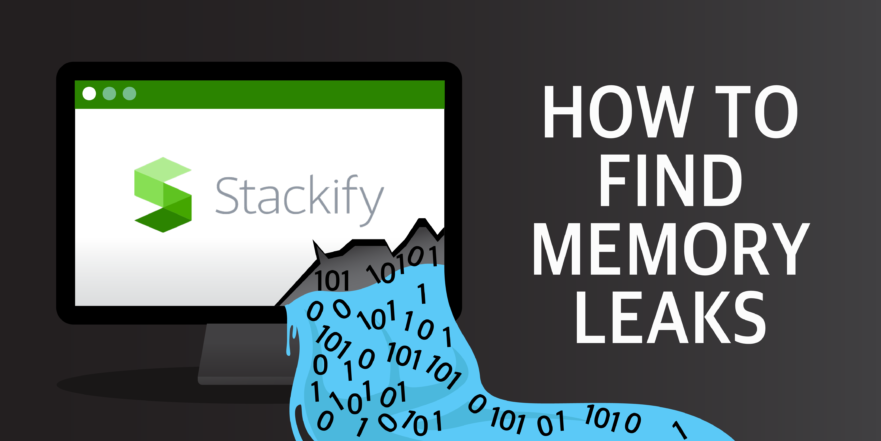 In this article, you will learn:

What is a Memory Leak?

Memory leaks can happen to any application in any programming language. But what is a memory leak?

A memory leak occurs when a programmer creates memory in large volumes but neglects to release any. When we say memory, we mean Random-access memory (RAM) and not permanent storage. If an application consumes more memory without freeing any, it will exhaust the server’s pool of memory over time. As a result, the application may crash the next time it uses more memory.

Luckily, programming languages have addressed this issue through features that can automatically free unused memory. One of them is the garbage collector or GC. However, GC can only do so much in freeing unused data. Some unreferenced objects can pass through the collector unharmed which contributes to memory leaks.

What Causes Memory Leak for every Language

Memory leaks are frequent in Python. There are times python garbage collectors fail to check on unreferenced objects. The unused data disregarded by the GC needs to be manually deleted by the programmer. If not released, it causes memory leaks in Python. To put it simply, memory leaks in python are caused by an unused large object which is not released, reference cycles in the code, and sometimes underlying libraries.

PHP is another programming language that is very familiar with memory leaks. While PHP has a garbage collection to prevent memory leaks, often several tendencies hinder garbage collectors to successfully execute their task. Take this situation as an example: an object’s refcount increases and never decreases, the GC detects the object as not garbage since it is technically still in use. In turn, the collector will not free up the object.

Memory leaks can negatively affect your business. Leaks are not as conspicuous as the usual program bugs. Think of it as a silent killer of your program. It creeps through the system and slowly wrecks the program.

Memory leaks do not directly affect your program’s behavior. However, accumulated leaks contribute to the application’s performance degradation due to exhaustion of the system memory. Don’t forget that user experience is important in keeping the business running. If your application offers poor UX, then your application is doomed to fail.

Since memory leaks can slowly deteriorate the application’s performance, it can greatly affect the availability and reliability of an application.

An evident example of how a memory leak can greatly affect a business is the incident with Amazon in 2012; a maintenance action gone wrong. Amazon decided to replace their data collection server, however, an incorrect configuration of some servers led to memory leaks. The leak went out of control with the affected server coming to a stop and affecting millions of users.

How to Find Memory Leaks

Finding memory leaks is very tricky. You can hardly detect and fix any at an early stage of development. One must be knowledgeable of the application and its internal object allocation details to properly detect a memory leak.

The first indicator of a memory leak is when you are running out of memory. Before your program crashes for memory exhaustion, there are telltale signs that you will notice. One of which is your application slowing down. If you notice this symptom, it is time to start crawling through your code to figure out what’s eating up all your RAM.

You will need a third-party program to check your codes, such as Stackify Retrace. This tool goes beyond standard Application Performance Management (APM) with centralized logging, code profiling, error tracking, and real user monitoring.

When you see your application slowing, you can run Retrace to your code system. It will report which code is going the wrong way or what is consuming so much memory.

Yes, it is not a direct solution to finding the memory leak. However, it is a huge step. The information you gather can help narrow down the search of what’s causing the leak.

How to Prevent Memory Leaks

While there is not a silver-bullet to preventing memory leaks, these precautionary measures can help avoid them.

Since memory leaks are caused by heaps of unused data, make sure that your garbage collector is enabled. The garbage collector is your first line of defense. Take time to learn your language’s garbage collection algorithm so that you can use it to its full potential. By doing so, you will know the conditions of objects by which the GC could bypass.

Another way to prevent this is by placing codes that dispose of unneeded resources. Since there are objects that the GC does not dispose of, the developer needs to write specific codes that signal to application that the resource’s work is done.

Lastly, you need an APM that will constantly check your program. Nitpicking every code in the program is simply not feasible. That is why an APM like Stackify Retrace is a simple solution to make sure that your code is in good shape.

Keep in mind that early detection is best when handling memory leaks. So, be consistent in your testing and monitoring. With Stackify services, you can monitor your code and over-all performance. Start your FREE, 14 day trial now and experience the benefits of Stackify.