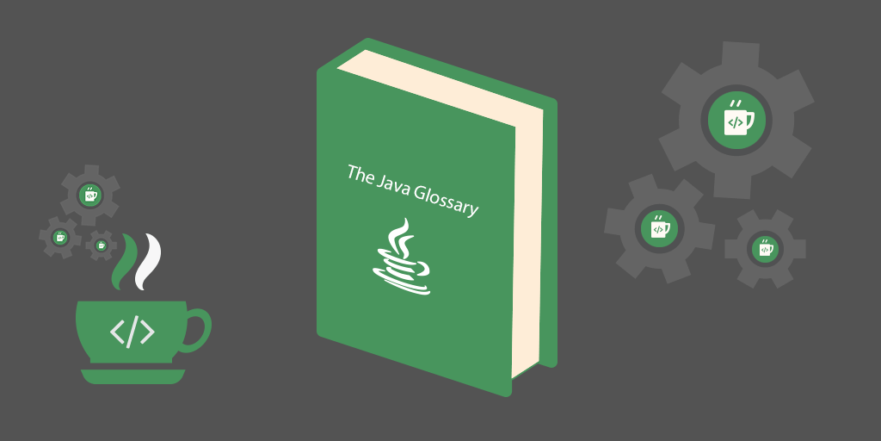 In this article, we’ll explore the foundations and core concepts of the Java language and terminology.

The write-up is divided into sections, ordered alphabetically to enable fast and easy search for these definitions.

abstract – a keyword used in a class or method definition, which specifies that the method/class is not going to be instantiated, but should be inherited by other methods or classes:

API (Application Programming Interface) – is the way to expose a set of pre-defined classes and interfaces to external clients to interact with them, without sharing the implementation details

argument – an input specified in a method call; it can be a literal value, a variable, or an expression:

array – a fixed-size collection of data of the same type, which can hold zero or more items:

autoboxing – automatic conversion between the primitive types and their corresponding object wrapper classes:

block – code between two matching open and close braces, which is the single logical unit of work inside the application:

break – a statement used to exit a loop/switch statement/labeled block; the application continues execution with the statement immediately following the containing block:

byte – a primitive type of the size of eight bits:

bytecode – the instruction set for Java Virtual Machine, created from source files into bytecode by the compiler

case – a keyword that defines a particular group of statements executed in a switch statement:

casting – conversion from one data type to another:

catch – the block of code inside try/catch statement, responsible for handling exceptions:

char – a keyword used to declare a variable of single type character:

checked exception – an Exception that is caught at the compilation time, usually in the block or thrown in the method header

class – the core type in Java that defines the implementation of a particular kind of object; it defines instance and class variables and methods, as well as specifies the interfaces it implements and the immediate superclass of the class, by default Object:

comment – a piece of explanatory text ignored by the compiler:

concurrency – it is the ability of a program to run several tasks in parallel, a primary feature of multithreading

condition – a boolean expression controlling a conditional statement or loop:

constant – a final variable in Java, which means that the reference of it cannot be changed once initialized:

constructor – a method inside the class, which creates and initializes objects in it – needs to be public and names the same as the class:

continue – a keyword used to resume application execution at the end of the current loop:

declaration – officially, this is defined as a statement that establishes an identifier and associates attributes with it, without necessarily reserving its storage or providing the implementation

default – the optional destination used in a switch statement, when neither case statement matches the requested behavior:

deprecation – a class/method/interface that has been made obsolete by later versions of the library or of the language itself; it should not be used as there is no guarantee that it will exist in future versions

do – a keyword used to declare a while loop ensuring execution of the first iteration of the loop before the check of the boolean condition:

DOM – Document Object Model, defined by the W3C, that allows applications to dynamically access and update the content, structure, and style of documents

downcast – a process of changing the data type from Object to the particular type, i.e., Integer:

double – a Java primitive type of the type double:

else – a keyword used in if/else condition statements, executed when the test condition is false:

enum – a Java keyword used to declare the enumerated type (whose values are a fixed set of constants):

exception – an exceptional circumstance preventing the program to continue working regularly (usually an error or bug); here are some best practices to deal with and further understand exceptions in Java

extends – a keyword used to define the inheritance of classes or interfaces:

field – a variable defined outside of all defined methods, but inside of the class; in other words, a member of a class

final – a Java keyword indicating that an entity is immutable, thus, you can’t change its reference during the program execution:

finally – a block in a try/catch statement executed even Java exception or runtime error occurred:

for – a Java control structure used for loop execution:

garbage collection – the process by which the JVM automatically frees up unused memory; to go further into the GC process and potential problems in that process, you can read the deep-dive into memory leaks here

hash code – a value used to provide an efficient way to map object and its location, returned by a hash function

hexadecimal – a number represented by the base of 16

HTTP(S) – HyperText Transfer Protocol (Secure); a protocol that defines all rules how the browser should communicate with a server

identifier – a name of a class, variable, method or interface defined in the code by the software developer:

if – a Java control structure used to choose if execution of further actions should continue or not:

implements – a Java keyword used to indicate which interfaces are implemented by the current class:

import – a statement used to enable the use of other classes or interfaces from different Java packages:

infinite recursion – a recursion that can technically continue indefinitely; it very often indicates a logic error and can lead to StackOverflow errors

inheritance – a feature of object-oriented programming, where classes contain all variables and methods defined in their supertypes

int – a Java primitive of the type integer:

interface – a Java keyword used to define the collection of methods and constant values that can be furthermore implemented by other classes:

iteration – a single execution of a loop

JAR – Java Archive is the default Java packaging mechanism to aggregate multiple files into one (similar to .zip)

local variable – a variable defined in the method body, visible only inside it

long – a Java primitive of the type long:

memory leak – a situation during the program execution where memory that is no longer being used cannot be removed by the garbage collector as there is still a reference to it; it eventually leads to OutOfMemoryException

method – a particular function implemented in a Java class:

module – a group of program components; in Java, the term that’s used for it is package

multithreaded – a program capable of concurrent execution on multiple threads

native – a keyword indicating that particular method is not implemented in Java language itself, but in another programming language

nested class – a class, which is implemented inside the body of the other class

new – the operator used to create an instance of a class

object – an instance of a particular class; also the core concept of the OOP

OOP – Object Oriented Programming – a primary paradigm in modern software development, focused on objects as primitives, not the specific actions; each object is created/instantiated from a class

operator precedence – the order of processing conditions or equations with the multiple operators, similar to the mathematical concept of order of operations

overriding – providing a different implementation of the original method in its subclass:

private – a Java modifier, used to specify the visibility of a method or a variable, so they can be accessed only within its class

scope – it determines the visibility of elements in the program, for example, local or global variables

serialization – the process of encoding and decoding the objects to the stream of bytes, and vice-versa

short – a keyword used to specify the variable of the type short:

static – class member variable stored and accessed as a single instance for all objects of that class:

stream – a byte-stream of data sent from sender to receiver

thread – a basic, single lightweight execution process supported natively by the JVM as well as by the OS

throw – a statement used to throw an Exception:

throws – a keyword in a method header indicating that one or more exceptions will be propagated from this method:

try – a block of code that allows exceptions to be caught using a catch block:

unchecked exception – an error without handler defined in the program implementation, cannot be dealt with at compilation time

Unicode – a 16-bit character set defined by ISO 10646, designed to make exchange and display of information easier across various languages

URI, URL – Uniform Resource Identifier/Locator. You can read more about the difference between these two concepts here

upcast – a process of casting to super type – for example from String to Object:

variable – an item of data associated with a specific type

variable declaration – the place in the application, where the specific variable is assigned to one of the existing Java types

volatile – a modifier specifying how the variable behaves in a multithreaded environment; the variable will never be cached in a thread-local – as it’s expected to be modified by different threads

while – a Java control structure used for looping:

wrapper – an object that encapsulates primitive types into one of the classes from the java.lang package: Boolean, Byte, Character, Double, Float, Integer, Long or Short to provide additional methods