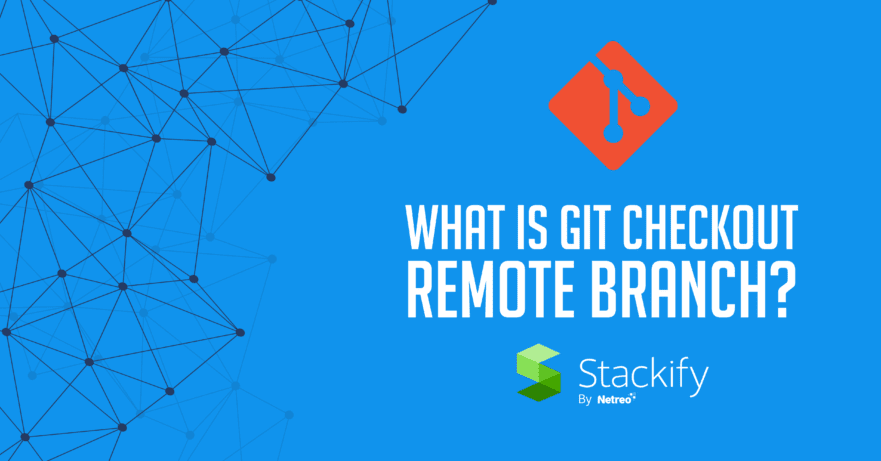 Git is one of the most useful tools for developers and development teams. And Git checkout remote branch makes it easier to collaborate and review. Let’s learn about it today.

As developers, we work with Git often. In fact, at Stackify by Netreo, we have a Git page where you can see quite a few repositories. Like many developers and groups, we migrated our version control to a Git-based system a few years back. So working with Git is a big part of our ongoing work.

It’s pretty important that developers understand how to work with Git, Git repositories (like controlling the size of your reports — an issue we talk about here) and code in Git. One thing you’ll be doing at least periodically is checking out a remote branch, so we put together this brief tutorial to cover the ins and outs of working with remote branches in Git.

Git is a way for software developers to track different modifications of their code. It keeps all the various versions in a unique database. Git allows multiple developers to work on the same code simultaneously. Sometimes, a programmer will need to access a coworker’s independent work, or “branch.” The git checkout remote branch action makes this possible.

Why Use Git Checkout Remote Branch?

In Git, a branch is a separate line of development. The Git branch command creates new branches.

When a programmer fixes a bug or adds a new feature, he or she creates a new branch to make the changes. The new Git branch ensures changes don’t threaten existing, working code.

Sometimes programmers need to access a branch that’s not stored locally but don’t want to create a new local branch or version. When you actually want to work on the remote version, you need to use the Git checkout remote branch method.

How Does It Work?

Git checkout remote branch lets us switch and work on a remote branch, just like switching to a local one. For the latest versions of Git, you can simply use:

In this case, the remote branch is called “branchxyz.”

Below are a couple examples of checking out remote branches with Git.

In this one, we’re simply checking out a remote branch called xyz:

That’s fine as long as we don’t have a local branch that’s also called “xyz.” In that event, we’d confuse Git with the “git checkout xyz” command. We need to specify that we’re referring to the remote branch like this:

If we’ve got multiple remotes, we need to use:

Git is an incredibly powerful tool for programmers to collaborate on coding projects. Imagine having 10 programmers all working on the same piece of code then merging those changes without any version tracking system.

With git checkout remote branch, multiple developers can work on a single piece of software, each making their own changes in a protected way, without adding unstable code to working software.

Git checkout remote branch makes it easy to review and collaborate with others in a failsafe way.

Making sure all the changes you commit work is essential in producing top-tier software. You need tools to help you write better and cleaner code.