Python is an interpreted, dynamically-typed, and high-level language. It also implements the basic concepts of an object-oriented programming language (OOP). It has a unique syntax, which makes it different from other programming languages such as Java, C++, and C. Hence, it is simple and easy to learn the language.

Most developers use frameworks to create code and develop applications. The framework provides a defined structure to the developers so that they can focus on the core logic of the application rather than on other elements.

In order to start development with Python, you will require a platform or framework to code. While choosing a framework, remember to consider the size and complexity of your application or project. In this article, we will discuss some commonly used Python frameworks.

Python provides support for a wide range of frameworks. Generally, there are two types of Python framework used while developing applications. 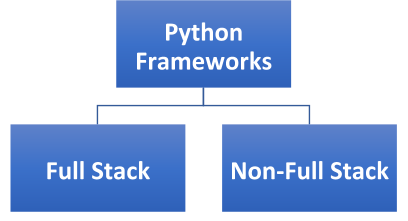 Django, developed by Django Software Foundation, is a full-stack Python web framework. It is an open source and free-to-use framework, released officially in July 2005. It helps developers to create complex code and applications in an easier way, and requires much less time compared to other frameworks. It follows the principle of DRY (don’t repeat yourself) and a model-view-template architectural pattern.

It is widely popular among developers as it has a vast collection of libraries written in the Python language. It emphasizes efficiency, the reusability of components, and less code. Some of the main features of Django are URL routing, object-relational mapper (ORM), authentication mechanism, template engine, and database schema migrations.

Django implements ORM to map its instances to database tables. It provides support for multiple databases such as PostgreSQL, MySQL, SQLite, and Oracle. Hence, it becomes easier for developers to transfer the code from one database to another. In addition, it also provides support for web servers. Because of its amazing features, Django is widely used by most of the renowned companies such as Instagram, Pinterest, Disqus, Mozilla, The Washington Times, and Bitbucket.

Web2py, developed by Massimo De Pierro, is a cross-platform web application framework written in Python programming language. It is an open source and free-to-use Python web framework, released in September 2007. It enables users to create dynamic web content in Python. The Web2py framework comes with a code editor, debugger, and deployment tool with which you can develop and debug code, as well as test and maintain applications. It incorporates a ticketing system, which issues a ticket to the user whenever an error occurs. This ticket helps the user to track the status of the error.

Some of the main features of the Web2py Python framework are:

TurboGears, developed by KevinDangoor and Mark Ramm, is a full-stack web application framework. It is a data-driven, open source and free-to-use Python web framework. With the help of components such as WebOb, SQLAlchemy, Genshi, and Repoze, you can easily develop applications that require database connectivity much faster as compared to other existing frameworks.

Some of the main features of TurboGears are:

CubicWeb, developed by Logilab, is an open source, semantic, and free-to-use Python web framework. This framework is based on the data model. You are required to define the data model in order to get a functional application. It uses the cube in place of using separate views and models. Multiple cubes are joined together to create an instance with the help of some configuration files, a web server, and a database.

Some of the main features of CubicWeb are:

Giotto is a Python framework that is based on the MVC (Model View Controller) pattern. It separates Model, View, and Controller elements in order to ensure that the web designers, web developers, and system administrators can perform their functions independently and effectively.

Apart from this, it also incorporates controller modules, which enables users to create applications on top of the web, irc, or command line.

Pylon, developed in December 2010, is a lightweight Python web framework. It places emphasis on the rapid development of applications. It is developed with some of the best ideas taken from languages such as Ruby, Python, and Perl. Hence, it provides a highly flexible structure for web development.

Note: The Pylon framework is in maintenance mode, after being merged with Pyramid to make Pylons project in order to develop Python-based web technologies.

The non-full-stack frameworks do not provide additional functionalities and features to the users. Developers need to add a lot of code and other things manually. Some commonly used Python frameworks are:

Bottle, developed by Marcel Hellkemp, is a microframework. It is an easy-to-use lightweight framework generally used to build small web applications. It creates a single source file of every project or application. It has no other dependency than Python Standard Library.

Some of the basic features of the Bottle framework are:

CherryPy is an open source object-oriented Python framework. Remi Delon is known as the founder of the CherryPy project. The CherryPy framework is widely implemented by developers to create Python web applications. It has its own multi-threaded web server.

You can create applications using CherryPy that will run on any Python-supporting operating systems such as Windows, Linux/Unix, and macOS.

Some of the common features of CherryPy are:

Flask, developed by Armin Ronacher, is a powerful Python web application framework. It is generally termed a microframework because it does not have the following elements:

The functionalities provided by the above-mentioned elements are now provided by third-party libraries. It depends on the Werkzeug WSGI toolkit and Jinja2template. Some of the common features of the Flask framework are:

Sanic is an easy, open source, and simple Python framework. This framework is similar to Flask in function but it is much faster comparatively. It was specially designed for quick HTTP responses with the help of asynchronous request handlers.

A remarkable record was made during a benchmark test performed using the Sanic framework. It was recorded that Sanic framework has the potential to process 33,342 requests in a second. This statistic is enough to display how fast Sanic is.

Tornado, developed by Ben Darnell and Bret Taylor, is a Python web application framework. Initially, it was developed for a company named FriendFeed, which was later taken over by Facebook in 2009. Tornado is an open source framework and is generally known for its high performance. It uses non-blocking network I/O with the ability to handle more than 10,000 connections at a single time.

Some of the main features of the Tornado framework are:

Which Python framework is the best?

Each framework has pros and cons and every developer has different coding styles and preferences. We hope you find a framework on our list that is valuable to you and your team.