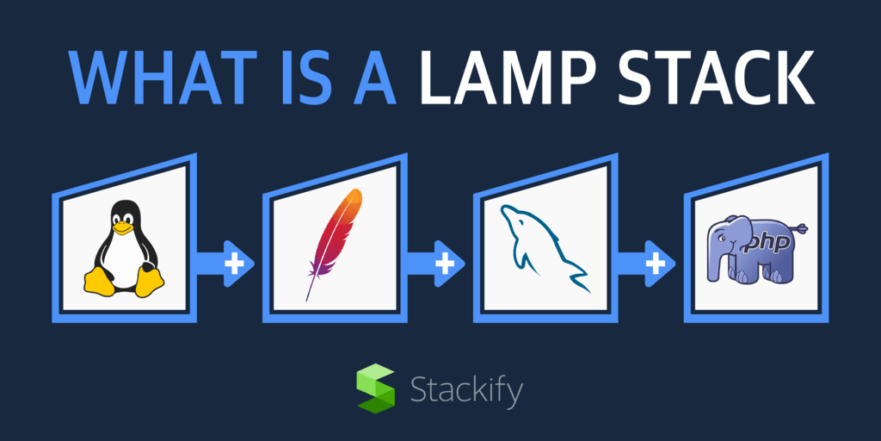 Need help on what tech stack suits for your software project? In this entry, let’s learn about LAMP stack’s architecture, its components, and how it works.

First, let’s explain the term stack in the software development world. Stack comes from the coined term “solution stack.” It is a collection of software technology that is packed together to form a platform. This platform supports any kind of application.

In 1998, Michael Kunze introduced the term LAMP stack. It stands for Linux, Apache, MySQL, and PHP, which eventually became the foundation for Linux hosted web applications.

LAMP is known for its free and open-source approach to back end development. It contains Linux OS, Apache web server, MySQL database, and PHP. Besides PHP, developers can also use Python and Perl as an alternative.

Developers choose the LAMP stack because of ease of deployment and customization. Also, it has large community support that can cater to any types or kinds of web applications. Not to mention, it works as an alternative to costly software packages and enterprises.

As a result, it is the most popular architecture on the web. LAMP architecture is behind widely-known Content Management Systems (CMS) like WordPress, Joomla, and Drupal. Therefore, if you’re working with one of these popular CMS, you’re using the LAMP stack on your Virtual Private Server(VPS) or dedicated server.

Let’s examine how each component contributes to the entire capabilities of the stack:

Linux is the operating system and sits as the first layer of the LAMP stack. It is the backbone, as all other components run on top of it. Also, the programming language and database management used in developing an application must coincide with what platform to use. In this case, PHP and MySQL work efficiently with Linux. On the other hand, SQL, ASP.NET, and ASP are better suited to Windows.

Linux has an extensive worldwide user base that extends across different industries.

Although developers can work with the rest of the stack components on different operating systems, Linux still dominates because of its flexibility and easy configuration options compared to other operating systems.

Apache web server is the most widely used server in the world. It serves more than half of the websites on the Internet. Appache offers extensive support with its well-developed community. It works using the HTTP to process requests and transmit information over the Internet.

Developers choose Apache for its mature and feature-rich ecosystem. Although there are other entrants such as NGINX, the choice depends on the application’s requirements.

The third layer of the LAMP stack is the MySQL database. It is an open-source relational database management system that stores application data. With MySQL, it stores all the information in a format that is easily queried using the SQL language.

SQL language works well with a structured business domain. Also, MySQL is robust and proven suitable for running large and complex websites. It supports SQL and relational tables. By doing so, it enables developers to build dynamic enterprise-level databases.

If you want to optimize your application, you can view SQL queries from your code with Prefix.

The PHP language works with Apache to build dynamic web pages. Developers can’t use HTML alone to execute dynamic processes. It needs a programming language such as PHP to pull data out of a database. PHP executed this functionality by simply integrating PHP code into the parts of a page that needs to be dynamic.

Note: PHP programming language is an efficient language. However, using the LAMP stack, developers can swap out PHP in favor of Perl or the increasingly favorite Python language.

Let’s examine how these four layers interoperate using the high-level examination. The process starts when the Apache web server receives requests for web pages via a user’s browser.

For example, if the request is for a PHP file, then Apache passes the request to PHP. Next, it loads the file and executes the code. Meanwhile, PHP communicates with MySQL to fetch any data referenced in the code.

After that, PHP uses the code in the file and the data from the database. The browsers need this to create the HTML that browsers require to display web pages. The LAMP stack can handle both static web pages and dynamic pages. Dynamic means the contents keep on changing depending on the date, time, user identity, etc.

After running the file code, PHP passes the resulting data back to the Apache web server, then sends it to the browser. During this process, it stores new data in MySQL. This interconnectivity is made possible by the Linux operating system running at the base of the stack.

So, why would developers choose the LAMP stack over other tech stacks?

Here are some benefits to consider:

But, LAMP stack default settings might not work all the time…

A thorough understanding of the four software stacks helps developers in debugging and troubleshooting processes. It allows them to examine how each layer interconnects on one another.

For instance, a common Linux layer issue is when a disk drive is full. Developers know that this is because of failure to track file storage, temporary files are not deleted, or failure to allocate common storage for assets. Unfortunately, these issues also affect all other layers in the stack.

Likewise, when MySQL database goes offline or has long query processing. Or when the Apache server has memory issues and has I/O blocking requests. Expect that there will be PHP related errors associated with it. When developers know which layer has issues, then they know which configuration files to troubleshoot.

However, that would require lots of effort.

But, instead of spending your time tweaking the Linux server, you can focus on developing your sites. Let an Application Performance Management(APM) tool, such as Stackify Retrace, help speed up your application. Retrace provides automated alerts and notifications, maintenance and management insights, and others.