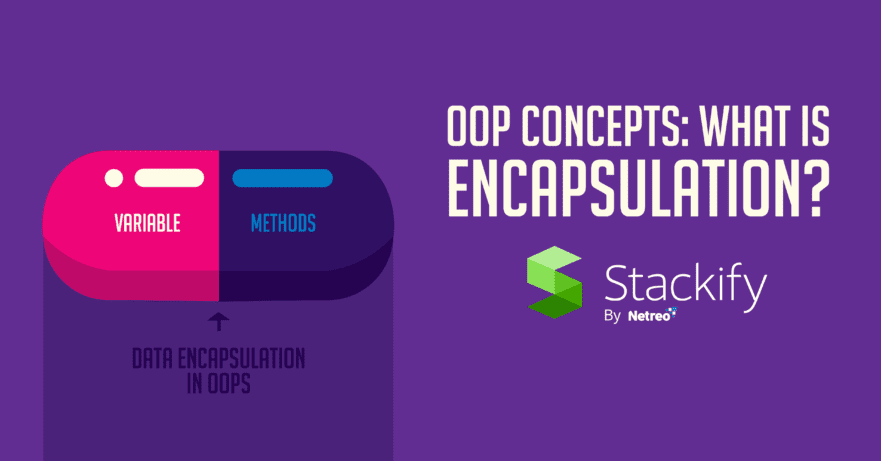 Encapsulation is one of the fundamental concepts in object-oriented programming (OOP). Let’s examine how it’s done and unwrap some examples for this concept.

By definition, encapsulation describes the idea of bundling data and methods that work on that data within one unit, like a class in Java. This concept is also often used to hide the internal representation, or state of an object from the outside. This is called information hiding.

The general idea of this mechanism is simple. For example, you have an attribute that is not visible from the outside of an object. You bundle it with methods that provide read or write access. Encapsulation allows you to hide specific information and control access to the internal state of the object.

If you’re familiar with any object-oriented programming language, you probably know these methods as getter and setter methods. As the names indicate, a getter method retrieves an attribute and a setter method changes it. Depending on the methods that you implement, you can decide if an attribute can be read and changed. You may also control if the attribute is read-only or not visible at all. Later, we’ll show you how the setter method can also be used to implement additional validation rules to ensure that your object always has a valid state.

Let’s take a look at an example that shows the concept of encapsulation in Java. This example implements information hiding and applies additional validation before changing the values of your object attributes.

If you’ve read our previous post about abstraction, you already saw several examples for encapsulation. It’s a basic concept that most Java developers use without a lot of thought. In essence, it’s simply how you design a Java class. You bundle a set of attributes that store the current state of the object with a set of methods using these attributes.

Encapsulation was used when the CoffeeMachine class example was created. The attributes configMap, beans, grinder and brewingUnit store the current state of the CoffeeMachine object. The methods brewCoffee, brewEspresso, brewFilterCoffee and addBeans implement a set of operations on these attributes.

You can clone this and all other classes of the CoffeeMachine example project at https://github.com/thjanssen/Stackify-OopAbstraction.

As explained earlier, you can use the encapsulation concept to implement an information-hiding mechanism. Similar to the abstraction concept, this is one of the most commonly used mechanisms in Java. You can find examples of it in almost all well-implemented Java classes.

You implement an information-hiding mechanism by making your class attributes inaccessible from the outside. You can also provide getter and/or setter methods for attributes to be readable or updatable by other classes.

Java supports four access modifiers that you can use to define the visibility of classes, methods and attributes. Each modifier specifies a different level of accessibility, and you can only use one modifier per class, method or attribute. As a rule of thumb, you should always use the most restrictive modifier that still allows you to implement your business logic.

Starting from the most to the least restrictive, these modifiers are:

Let’s take a closer look at each of these modifiers and discuss when you should use them.

For all attributes and internal methods that shouldn’t be called from external classes, choose the private modifier by default. You might need to make an exception to this rule when you’re using inheritance. Also, exempt some of the subclasses that need direct access to an attribute or internal method. In that case, you should use the protected modifier instead of private.

No modifiers mean you can access attributes or methods within your class and from all classes within the same package. That’s why it’s often called package-private.

That might seem a bit confusing in the beginning. However, it’s very useful when the classes in your package implement a well-defined set of logic. It’s also practical if you want to control the API that’s available to classes outside of this package. You can then use package visibility to implement a method that can only be used by classes within this package. That allows you to create a package internal and an external API.

This is the least restrictive access modifier. Methods and attributes that use the public modifier can be accessed within your current class and by all other classes.

Public methods and attributes become part of the public API of your class and of any component in which you include them. That is almost never a good idea for any attribute, so you should think twice before using this modifier on a method.

When a method is publicly available, you need to ensure that it’s well documented and robustly handles any input values. Also keep in mind that this method will be used by some part of your application, which will make it hard to change or remove it.

Generally, your public API should be as lean as possible. Public APIs should only include the methods which are intended for other parts of the application or access by external clients.

Here you can see an overview of the different access modifiers and the accessibility of the attributes or methods.

The Coffee class provides a good example of the information-hiding mechanism and represents a drink that was brewed by the CoffeeMachine.

The class uses two private attributes to store information about the CoffeeSelection and the quantity of the drink. The access modifier private makes both attributes inaccessible for other classes within the same or other packages. If you want to get information about an object’s current state, you may call one of the public methods.

The getSelection method provides read access to the selection attribute. It represents the kind of coffee that was brewed by the CoffeeMachine, e.g. a filter coffee or an espresso. As you can see in the code snippet, we didn’t implement a setter method for this attribute, because you can’t change the kind of coffee after it is brewed (at least we don’t know how to change a boring filter coffee into a strong and tasty espresso!).

The available quantity of a drink changes over time. After every sip you take, your cup contains a little bit less. Therefore, we implemented a getter and setter method for the quantity attribute.

If you take a closer look at the setQuantity method, you can see that we also implemented an additional validation. If the coffee is especially delicious, you might drink it until your cup is empty. When you do that, your coffee is gone, and you can’t drink any more of it. So the quantity of the Coffee has to be greater or equal to zero.

Encapsulation is one of the core concepts in object-oriented programming and describes the bundling of data and methods operating on this data into one unit.

It is often used to implement an information-hiding mechanism. This mechanism reduces the accessibility of attributes to the current class and uses public getter and setter methods to control and restrict external access to these attributes. These methods allow you to define which attributes can be read or updated and enable you to validate the new value before changing the attribute.

Encapsulation provides the basic property to hide data, thereby providing security to user data. Performing encapsulation is a great OOP practice, though it’s best when paired with a robust APM solution like Retrace for error monitoring.