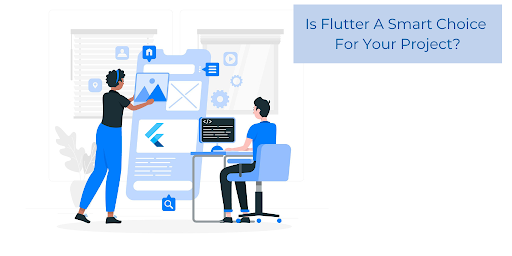 As an application developer, you come across various app development frameworks, including Flutter. The framework has gained significant popularity for creating very popular apps in a short period. The most popular is of course, Google Add, the app developed by Google using Flutter. But does this prove that the framework is best for your next project?

Flutter is an open-source UI framework for developing native mobile apps that Google introduced in 2017. The framework enables developers to create applications for Android and iOS using a single code base and programming language, simplifying and accelerating hybrid app development. This feature makes the framework extremely useful for Android and iOS developers. Let’s take a look at the advantages and disadvantages of Flutter to see if it’s the right framework for your next project.

Advantages of Using Flutter In Your Projects

Below are some advantages that make Flutter a great framework for hybrid app development.

As an open-source framework, accessing the original codebase to build your project is simple. An active community of users provides the help you need, especially if you get involved in supporting others by reporting bugs and sharing your knowledge as it grows.

Flutter is renowned for its top-notch documentation. Well-formatted and organized documentation makes it simpler for developers to comprehend and create apps. In addition, great documentation helps with ongoing maintenance and feature development.

You can accomplish two things at once! Ready-to-use widget features enable you to simultaneously make the same app for Android and iOS. Most widgets are incredibly customizable, saving you time like no other framework and helping you apply best coding practices. In addition to numerous core layout widgets, the framework provides a large set of Material and Cupertino widgets that perfectly mimic the behavior of each design language.

Hot reload is a great development tool that also saves hours of time and helps developers keep their sanity! Hot reload features identify necessary changes for developers to make in their app and speeds up code accumulation by using the Dart language.

Flutter is ideal for developing an MVP when you have a small budget and an impending deadline. The framework has a flexible and user-friendly UI that makes designing easy and fast. As such, developers can use Flutter to test app ideas without requiring a huge investment of money or time. Add Google’s dependable and ample community support, and Flutter is one of the best, budget-friendly ways to create an MVP.

Flutter has a user-friendly design and features that help developers create stunning, easy-to-use interfaces. Moreover, the framework offers extensive libraries, API access, scrolling capabilities and a wide variety of adaptable components. These components allow developers to create a natural user experience for both Android and iOS platforms. Even older iOS and Android software versions deliver a consistent user interface when developed with Flutter.

Flutter uses a single codebase for different platforms, making app updates an easy process. The ability to send updates to both Android and iOS simultaneously saves time and money, as well. Version releases and updates are synchronized easily in the backend, so developers don’t have to work on them separately. Developers also find bug fixes and required maintenance easy to manage.

A declarative framework Flutter makes writing and adapting views to various screen sizes much simpler than with the iOS SDK. Moreover, animation creation is also more fluid than programming natively on iOS and Android. And while Flutter is a relatively new framework, support for desktop and web apps is getting better and better.

Disadvantages of Using Flutter In Your Project

After reviewing the top advantages of Flutter, let’s take a look at some disadvantages.

The Flutter framework uses the Dart language, which is its biggest weakness and greatest strength. Dart is powerful, flexible, productive, fast and accessible. However, the language has experienced limited growth in the past 5 to 6 years. Flutter is a less popular programming language than so many others that finding a great Flutter developer may be challenging.

Apps created using Flutter are heavier than native-designed apps, which can negatively impact user uptake. Flutter app size, even for an elementary application, is rather significant. The minimum app size is about 4MB, which is much more than Java or Kotlin. Whenever users go to download the app, the first thing they see is size. When the size is larger than expected, you face a bigger chance of users canceling the download.

When it comes to developing software, the support of third-party libraries is crucial. Despite ongoing improvements, Flutter is struggling to gain mass popularity. The framework still requires work-arounds to support Java libraries, for example, which other frameworks do quite easily. Until the ecosystem matures, finding third-party library packages to support your app will take some work.

Final Verdict: Should You Use Flutter for Your Next Project?

So, is Flutter effective for developing apps? The answer is a definitive Yes!

The benefits outweigh the drawbacks overall, especially if you are making an application for iOS and Android platforms. The high performance, dynamic code writing, simple MVP development and stunning framework designs make creating mobile applications for various platforms less complex and time-consuming. When using Flutter for app development, the quality of an app is not compromised, which makes the framework worth considering for your next big project.

Paresh Sagar is the CEO of Excellent Webworld, a company that has been leading the app development market since 2011. He, along with his 300+ developers has helped many startups and enterprises to go digital.