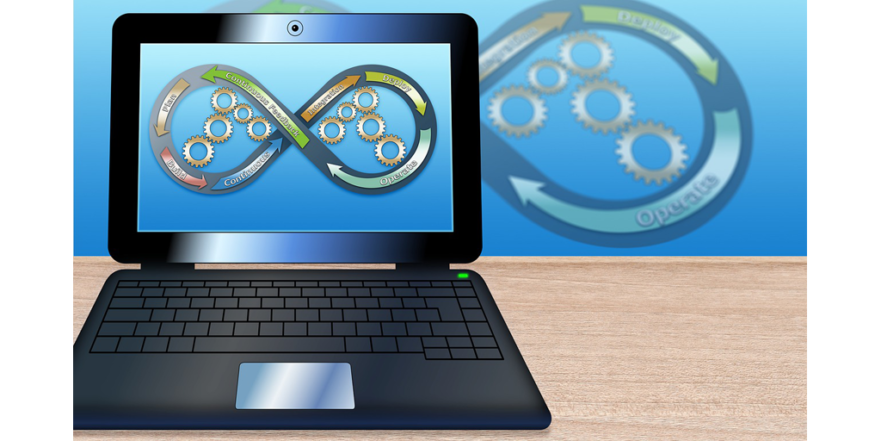 An optimized DevOps process flow is vital for DevOps teams.  It allows for seamless development and operations integration through the implementation of the CICD pipeline for development, deployment, and feedback.

Devops brings development and system operations together under one umbrella to better manage complex software systems and build on communication and management.

Together, they work in synergy to improve the delivery and deployment of software projects.  To maximize the benefits of devops, adopt an agile approach to your projects by breaking down large complex projects into smaller iterations with quicker deliveries.

Devops involves deploying new code changes as often as they are committed to benefit from:

Adopting agile methodologies for project management isn’t required to implementing devops process flow but works in conjunction to maximize the productivity and quality of life for modern software projects.

Step 2 – Start thinking of QA, code, and deployment as one entity

By integrating testing, coding, and deployment into one loop, devops teams are able to improve communication and collaboration between team members and reduce frustration caused by poor communication.

After deciding to add devops process flow to your team, add new tools to your software as resources for your devops implementation.

Git is an absolute must for collaborative software development. Git is a version control tool designed to solve the headache of managing code bases and enable continuous integration and continuous deployment (CI/CD).

GitHub, GitLab, and BitBucket are applications that host your code base and allow easy git usage.

Travis CI is an open source CI/CD tool that seamlessly connects with GitHub to allow for easy deployment coordination and implementation of your CI/CD pipeline.

Instead of fire-fighting application issues, take a proactive approach to monitoring and managing your application.  Using an Application Performance Management Tool, like Stackify Retrace, can spot performance issues and hidden errors before your code is ever deployed to your production environment.  Spend more time actually writing code, and less time solving issues.

Increase actionable communication between teammates and users by implementing a user feedback tool, such as Usersnap, to easily share screenshots and submit bug reports.  Devops teams can prioritize what needs to be improved and built next through easy feedback channels.

A common approach to traditional deployment is to deploy at set intervals as deployment is often treated as a sensitive task that can greatly affect and in return shut down systems if a problem occurs.

Teams that use devops are able deploy multiple times a day without the additional stress of a system shut down thanks to their CI/CD pipeline. The CI/CD pipeline is the implementation part of the philosophy of devops.

The ideal CI/CD pipeline has automation built into it to manage testing new code before it gets merged and then deliver or deploy the new changes. All developers working in this system have to do write code, commit the code, and then see if their new changes successfully makes it through the pipeline.

Rather than manually managing your deployments every time you make a change to your code base, you can create your pipeline once and then all your commits will be tested and deployed automatically.

Summary of adding devops in your team

Ashley is a writer and content strategist based in Austria. She works for Usersnap, a SaaS company with a visual QA & user feedback tool. They help make user acceptance testing a breeze for companies such as Facebook, Cisco, and Canva.